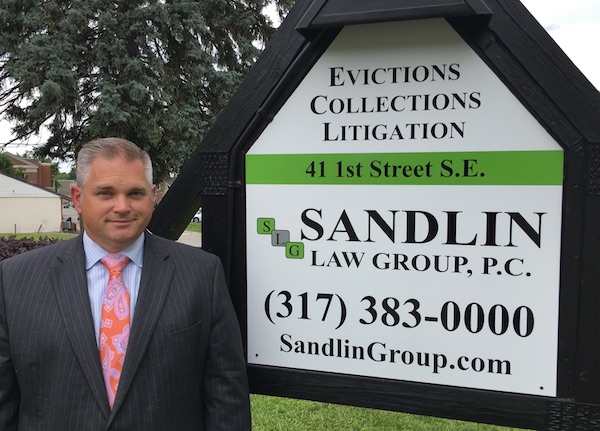 Mr. Sandlin graduated from Indiana University at Indianapolis in 1995 where he earned his Bachelor of Science in Criminal Justice.

Mr. Sandlin then studied law at The University of Toledo, College of Law. He earned his Doctorate of Jurisprudence in 2000, and was admitted to practice with Indiana State Bar and in the Southern Indiana District of the United States Federal District Courts. Mr. Sandlin commenced his legal career as a Marion County Deputy Prosecuting Attorney in Indiana.

Because of his strong desire and interest in serving the small businesses and landlords of the Indianapolis area, he started his own private practice in 2002. To start, the practice dealt almost exclusively with landlord / tenant matters and consumer debt collections. Mr. Sandlin’s practice has since evolved into Sandlin Law Group and a team of legal professionals serving client needs in personal injury, family law, estate planning, criminal defense, and in other matters requiring legal representation. Mr. Sandlin is a member of the Indiana State Bar Association, the Hamilton County Bar Association, and the Indianapolis Bar Association.

He is also a member and the former Vice President of the Indiana Creditor Bar Association. Mr. Sandlin has served in the Indiana Army National Guard and earned the rank of Captain. He is proud native Hoosier and enjoys his free time on his farm with his wife and children in Westfield, Indiana.